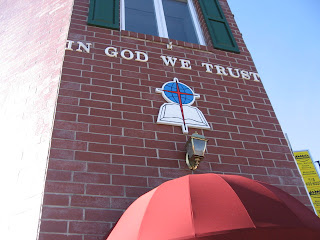 I have always kinda liked the Billy Joel song "New York State of Mind" although I never thought I would go to New York. To be completely honest I don't like cities or large crowds of people so since that pretty much describes New York you can see my hesitation to go.

Well, I spent Friday night and all day Saturday in Brooklyn, go figure. I was given the opportunity through FBC Smyrna to go and check out some mission projects opportunities. It was a very rushed trip, no time for sight seeing or anything like that but it was all business.

We arrived at JFK 2hrs late (after an hour delay while still in Nashville and a "traffic jam" in the air causing some circles) and caught what seemed to be the last trains of the night. We rode the "Air Train", the "Long Island Rail Road", then a subway train and ended the night with a few blocks of walking, to finally settle in at the missions center about 1am. A few hours of sleep later we woke up had a little breakfast and off we were.

The first stop of the day dropped Eddie, Pete and David off to meet with a pastor of a church in the Sunset Park neighborhood of Brooklyn, who runs a baseball program for the kids in his church from ages 8-18. We attended the opening day festivities for the 68th prec. Youth Assoc. league complete with a parade featuring the police bag pipe core (I guess they are a core or maybe band, I'm not sure) and all the teams of the league marching in their uniforms. After the ceremonies we left the guys to see the church and help run practice for the 15-16 year old team, and talk with the pastor about a project our church could help with.

After getting the guys dropped off Tim, Rodney and myself caught a train back to the missions center to meet with a pastor, who has a Chinese church in the "Chinatown" part of Brooklyn. We met with the pastor and three young ladies who attend his church and have a small praise band. After meeting at the missions center for a little while the pastor took us to Chinatown for lunch. I won't describe everything we ate because some of you may have weak stomachs, but lets just say there were chicken feet and cow stomach lining made up a couple of the dishes YUM! After "lunch" we caught the train back to the mission center to meet up with the baseball crew.

By the time we all got back, Eddie and I grabbed our stuff and caught the series of trains back to JFK. I arrived home about 12:30am.

Good Stuff. As I process the things I saw and heard I will post again my feelings about New York and our opportunities there.
Posted by Brad Bynum at 6:53 AM